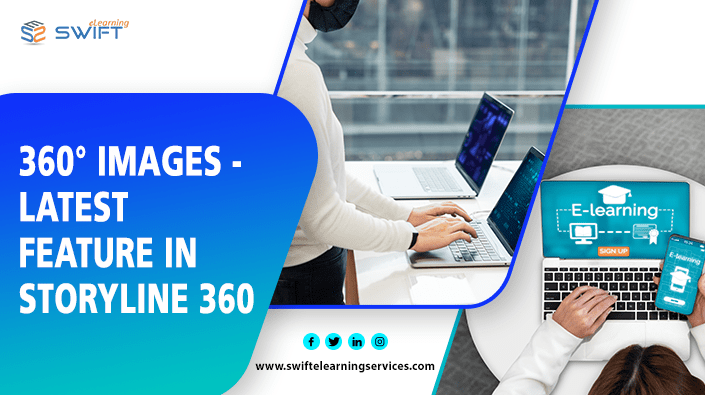 The features that have been included in Articulate Storyline in regards to 360° image are as follows:

A 360° picture is a multi-dimensional image or photograph that catches a subject from every possible perspective. With the latest update in Storyline 360, we can use 360° images to create elearning modules with engaging components like markers, hotspots, and added triggers, with which users will be able to navigate every possible perspective of a virtual environment within the project and develop learner’s skills eventually.

When an image is inserted into the slide, it can be adjusted with the provided handles, and can also be moved and located anywhere within the slide.

Image supporting format: Storyline 360 endorses all the image formats but it is recommended to use .JPEG for best results as images in this style won’t get compressed in regards to the size. If the images are bigger than usual, Articulate Storyline adjusts and auto fits the images accordingly. It is suggested to apply 2:1 aspect ratio.

You may customize the starting view of the activity with the 360° image editor. Simply go to the Interaction tab, select Edit, and then adjust the image to the desired angle.

As you keep moving through the image, the latitudinal and longitudinal values at the bottom of the 360° picture constantly update with the precise coordinates. Save your changes by clicking Set. To return to the original display, click Reset. To undo your modifications, click Cancel.

While using the 360° images, different interactions are provided for navigation, tour options for free navigation or a guided tour for learners. These can be found in the Markers & Hotspots panel.

Free navigation is ideal for allowing people to discover virtual elements at a given place. To mark the progress of the learner involved in the activity, check the ‘Show progress’ indicator box.

Hotspots: As we are familiar, hotspots are undetectable elements and are ideal for assessing learners’ abilities to investigate information on their own, by providing an effective approach to assist the learners to navigate 360° visuals while performing the actions through it. On the ribbon, you will have an ‘Interaction’ menu which can be used to edit the view, change the theme, insert markers and hotspots, etc. To include one or many hotspots into the image as interactions, choose the ‘Hotspot’ option, or right-click the picture and select Insert Hotspot.

You can customize the hotspot in two ways:

You may also be able to modify the appearance of any shape by holding and dragging them using control points. To delete a control point simply click and press the DELETE.

The color of the hotspots is set to the control of the theme. Select the Interaction tab and pick a color to alter with the original one from the default list. This resets the color of all the other hotspots.

For the interaction to look more creative, Articulate teams has added one of the best options to date on the hotspots which might be of interest; those are Revealing hotspots and Pulse Hotspots if Unvisited and their role can be noticed on hotspots when applied.

Both reveal and pulse are activated on start. Unexplored hotspots are represented by a transparency pulsating square. Hovering over a pulsating square or hotspot region reveals the complete hotspot form, while also changing the pointer to a hand. When visited, they become dark and their border grows. All the hotspots momentarily flicker when clicked outside of a hotspot.

When ‘Reveal’ is activated, ‘Pulse’ is deactivated and vice versa. Learners won’t be able to detect visited and unvisited hotspots until and unless they hover or click on the hotspot. Once they do, their changes will be noticeable. Hotspots can also be renamed within the timeline while adding action triggers specifically.

The better way to display important information is achieved by Markers while having a 360° tour, and all it takes is to place and adjust the marker over the 360° images and then add the subject.

You may add one or more markers to your interaction in the 360° picture editor. The Marker may be accessed via the toolbar, or by right-clicking the photo and selecting Insert Marker. The marker displays with a customized icon and a blank label where you may add a title, information, and/or material.

Modifying the Icons of Markers

To modify the icon for a current marker, select it, then click the Icon drop-down arrow and take a random symbol from the predefined icons or Content Library 360. If you choose not to use an icon, choose the ‘No icon’ option. Every Content Library 360 icon that you add to the current 360° picture interaction is displayed in the Custom section of the icon list.

‘Tooltips’ include audio, video, image, and text that can be placed on the interactions. When the user clicks the marker, the relative information pops up. Learners can experience interactions using inbuilt accessibility options for 360° images.

Each marker can have their accent color changed. In the ‘Markers’ tab, click on the accent and change the color you desire, to selected markers. In case you need to switch the marker colour theme, select ‘Invert Marker’.

For the animations on the markers to come into play for unexplored markers, go to the ‘Interaction’ tab and then select the markers drop-down list, from which you will be able to turn on and off the marker effects.

360° interactions Markers also have inbuilt states such as, Normal, hover, Visited, Selected, and so on.

The point to remember in regards to Markers is that, there is as of now no method to alter built-in markers for 360° interaction. Similarly, media such as audio and images, can also be inserted and changed in the interaction tab.