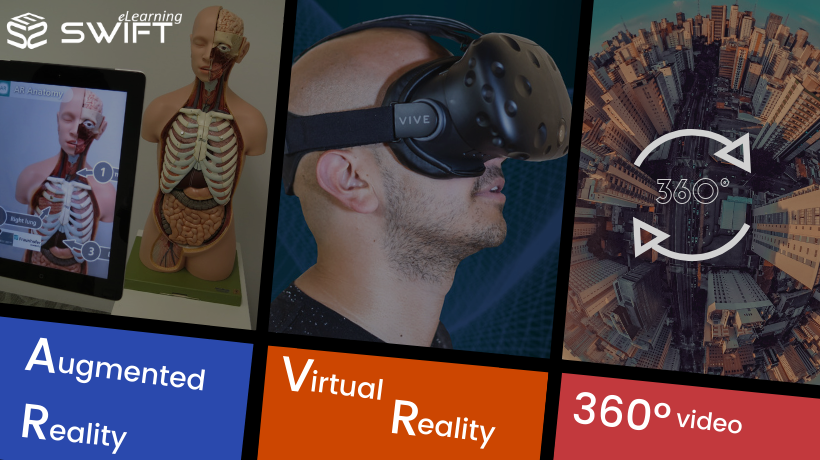 Gone were the days, where learner used to sit in a closed room with a book in his/ her hand and an instructor with the teaching aids. Over the last two decades, the change in the technology is unpredictable. A radical behavior in the minds of the learners paved a way to discover the new teaching methodologies and new teaching aids. In the midst of the whole scenario, eLearning has been a ray of hope and become a ground factor to modernize the learning in terms of Virtual Reality, Augmented Reality and 360° video.

You may not be wondering about these terms if you belong to the fields of eLearning and mass media communications. But, all the three technologies in one place gives you a lucid figure and might help you in leveraging your online training.

Virtual Reality, in short VR, is an emerging technology which gives immersive learning experience. A three dimensional environment, created using computer generated simulations allow the learners to interact with the virtual world. A specially made headset, VR headset acts as a learning interface and gives learner a 360 degree view of any location. Head movements of the learner will be tracked and give access to the virtual objects, look and move around the virtual environment as they would do in the real life.

Virtual Reality Applications makes a remarkable move in training the employees of various industries. Let’s see some of its applications.

While virtual reality creates a computer generated environments, Augmented reality superimpose the content and other digital information on computer generated images or a user’s view of the real world, therefore to enhance the learner’s perception of reality. There is no need of any special headset to view augmented reality solutions and this can be viewed through Android or iOS devices. Though virtual reality technology has gained word of mouth, most of the times it will be associated with the augmented reality technology.

Have a look on some of the Augmented Reality applications.

This is the same way as VR, but this shows a film of a real scene instead of a computer-generated simulated image. This creates immersive videos or spherical videos where every direction is recorded at the same time, which is shot using a collection of cameras or an omnidirectional camera. It places the learner in the center of the scene and creates a fully immersive environment. Viewers can watch 360 degree videos on any computer or can be viewed in any VR headset.

It is always appreciable when we follow a saying “Think Before You Act”. More importantly in eLearning industry, we need to be more cautious before start digging a project or course. Need to be aware of the technology, approach, client’s requirement and required tools etc. VR, AR and 360 degree video will take the eLearning courses to the next level since there are myriad applications of these tools in various industries.

I hope this blog gives you good pointers on how Virtual Reality, Augmented Reality and 360 degree video differ from each other.

We are just a step away to fulfill your eLearning requirements. For any learning solutions on course-ware / Digital content development please contact us at info@swiftelearningservices.com.