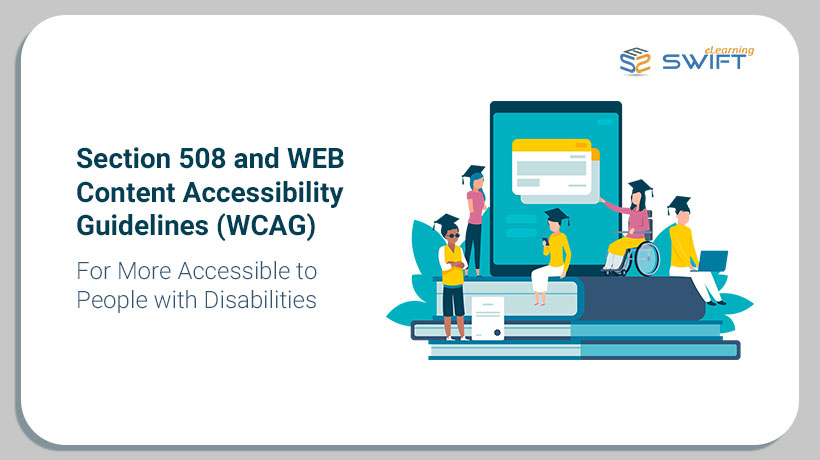 (WCAG): Web Content Accessibility guidelines are the guidelines with technical standards, to make web content handy in reaching out to disabled people. It has been conceptualized by W3C (World Wide Web Consortium) which is an international group supported by its own members and public, in developing and altering web standards.

The WCAG is categorized into three levels which resemble one another based on accessible standards. The levels being A, AA, and AAA. Level A denotes the lowest accessible standards pertaining to web content similar to the rules in Section 508. In AA and AAA, the guidelines are more scrupulous which pave the way for further accessibility. While referring to level AA guidelines, it includes A and AA standards. Similarly AAA includes guidelines of all the levels – A, AA and AAA.

Section 508: is an amendment of the Rehabilitation Act of 1973, which provides accessibility to the disabled people in electronic and information technology field through the U.S. Federal system.

Difference between Section 508 and WCAG:

As Section 508 comes under U.S law, this law (the Rehabilitation Act of 1973) is applicable in the United States and its federal agency system. WCAG differs from Section 508 as it is not a law but guidelines that standardized internationally in making the web-based content reachable to people afflicted with disabilities. In a nutshell, WCAG is acceptable internationally pertaining to web-based content and its practices. In contrast, Section 508 adheres mainly to the U.S based entities relating to electronic and information technology.

The fine points that include in Section 508 and W3C–WCAG are as given below.

Due to some limitations like extra cost and effort, the non-government organizations are prevented from making accessibility a priority. Instead, they opt for having one-to-one sessions with the concerned individual.

Why should you use Online Assignments tool via Learning Management System?

SCORM vs Tin-Can vs AICC
Scroll to top